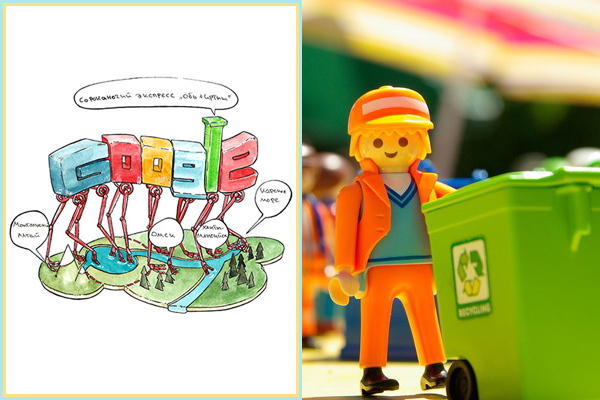 A 17-year old Omsk citizen Daria Barannikova became a finalist of Doodle 4 Google contest. If the girl wins her painting will decorate the welcome page of browser. The contest is held every year and this time it has a slogan Through the whole country on transport of the future the participants from all parts of Russia sent their versions for doodle - the Google logo which changes depending on celebration date or big event. The jury has chosen thirty works in three age brackets. The painting of Daria got to the top 10 of oldest group (age from 14 to17) the finalists will be chosen during online voting which ends on April 3rd and the winner name will be announced on April 20th. You can vote for Daria by following this link.

New type of sport - collect as much litter as you can

Tomsk citizens are going to take part in an unusual competition which will take part from June 6th up to June 10th during the eco week. There might be three places of holding the event – Tomsk riverbank, Burevestnik stadium and botanic garden. The idea of the competition was taken from Japan where people have special sport organizations which collect litter. “The local citizen in Japan during his running always fixed the distance he ran then he noticed a lot of litter on his way and decided to collect it fixed the quantity of collected litter and time. After a while some of his colleagues joined him and in ten years such act became grassroots movement”, says Sergey Trapeznikov the head of regional department of natural resources. According to the official Japan is ready to help in organization however there is going to be a slight difference - Japanese measure litter in grammes and kilograms but in Russia after mass cleaning litter measured in tons.